A planned reconstruction of the equipment is still going on at the enterprise; this is what for we have invited German specialists, who are fixing a new line of beer casting. We’ve written about that in our group Vkontakte.

It is impossible to talk to them during working hours. It I not polite to ask them anything, when the line, which produces steam, is functioning  to the right and to the left – there are serious faces of German specialists with documents.

Specialists have left for several days and we managed to take a short interview with Christian Kuschniok. 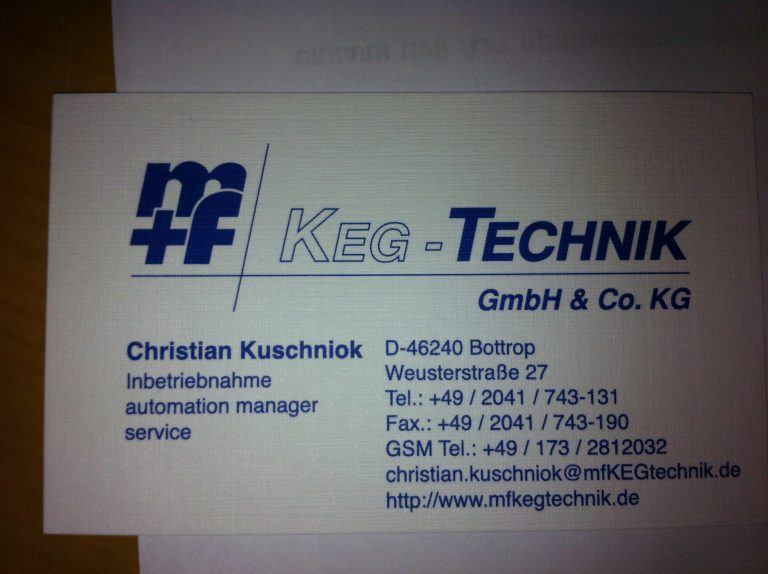 – Christian, thank you for your  agreement to give an interview for readers of our site. We will speak not only about beer but also about beer equipment.

– There is an opinion that beer countries do not differentiate in cuisines. They say that only in wine nations (France, Italy, and Portugal etc.) this difference is observed. And there are only two cuisines in general: French and Chinese. What can you say about this? Is there the German cuisine? What peculiarities does it have?

– We have about 1300 plants through the whole Germany. Each of them has its own sorts. There are in general bitter sorts of beer in the north of our country, southern residents, for example, Bavarians, drink more sweet sorts.

There are regional sorts. They drink kelsh in Cologne and in Dusseldorf – alt.

We have mixed enough cuisine and they cannot say that it differentiates somehow in regions. So it does not have anything special and they serve to beer that is usually served; there is not specific division.

– At the beginning of the 16th century there was constituted the law about beer purity, which has been steadily followed since that period. It admires. How have inhabitants of Germany managed to keep traditions? What is the secret?

– This system of quality has proved itself well. Why should we invent something new or change that works well?

– Germany and beer are two inseparable points in our mind. As we know, even some events in history of the country were connected with beer (for example, «beer putsch» or revolution because of the price increase for beer in Munich in 1888). Tell me in short how beer is seen by a regular German?

– We may say that beer is still drink №1 in the country, in spite of all changes, migratory as well. Cocktails, mixes and even soft drinks became popular recently, which are mixed of Coca-Cola and 2,5-percent beer.

The revolution is held in this direction. Women like drinking sweet sorts – among them 2,5 percent. There is a trend in the direction of refreshing, less alcohol – more pleasure. All breweries try to fill up these niches.

– Is it true that in Germany the factor of people’s motherland influences their beer habits? For example, will Bavarian drink Berlin beer? Or Swabian – Bavarian beer?

– Of course! I, for example, drink beer only from my native city. People remain faithful to their habits. A great amount of plants exist because of that. Bavarian will never drink bitter beer, which is brewed in the north. Everybody says: “This is mine, I used to it, and I will drink it!”

– Can “culture of drinking beer” exist to your opinion or it is also an advertising trick of brewers?

– People are different. It’s everybody’s business; one person may drink 2 glasses in a pleasant company, another – 10. Tastes differ. This is personal opinion of everybody.

A lot of people stop visiting pubs – inflation influences it, prices have increased. Cancellation of smoking in pubs also greatly influenced it (I will better drink beer and smoke at home).

– What do you see special first of all crossing the border with Ukraine?

– What do you think, is Ukraine a beer country?

– We are, for example, №2 in Europe. I do not know your statistical data, I do not know, how much beer you drink, so I cannot answer it. Your enterprise is developing and it is good.

– Our enterprise is not large. And it is harder to compete with huge concerns during the crisis. Their distribution is more aggressive and they have more possibilities. Nowadays, for example, 2,5 liters of beer can be bought for 20-25 hrn (it’s 0,85 – 1 euro). How do breweries like ours survive in Germany?

– There are many breweries, which 20-30 hectoliters per year “spill”, and only 3-4 people work at it. But they supply adjusted cities and villages. They exist because people appreciate them for their being native regional. So your enterprise is large enough as comparing with our shrimps.

– So what is the peculiarity of cooperation with our brewery?
We are not a big firm. We have a direct open contact with you, we know you, you are a good and solvent client.

– Wish something to the readers of our site.

– We wish them to try all sorts of beer, we’ve tried all (smiling – by author). Choose one of them, which they like more, do not try other brands, but support their own producer. There is less sense of drinking beer «Baltyka» if there is from Uman. It is standard for us.

News 08.02.2021
"Umanpivo" is one of the first Ukrainian solar-powered breweries
"Umanpivo" is an export-oriented company that plans to increase the volume of sales of p…