Ukrainian brewershave produced 98,1 million dals of beer (without taking into account soft beer and beer with low alcohol concentration – to 0,5 %) since January to July of this year according to the data of the State Committee on Statistics. In general, this index has reduced for 24,1 % as compared with analogical period of the previous year 2014. 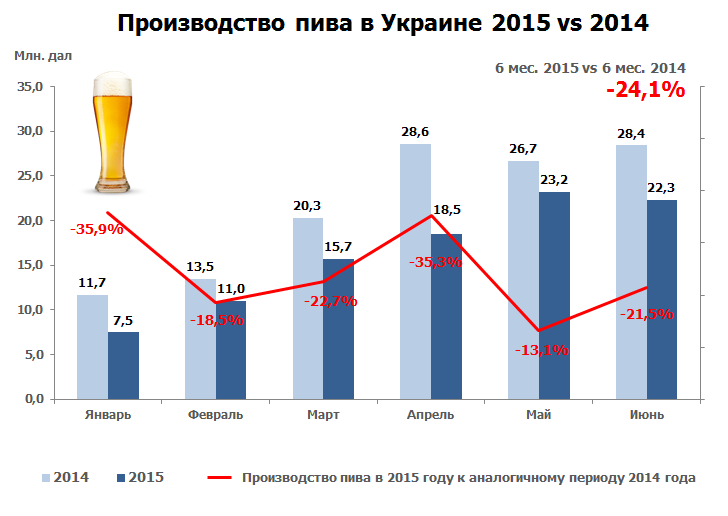 State Committee on Statistics of Ukraine gives the following data: producers of beer produced for 21,5 % of beer less in July of 2015 than in June of 2014. Today this index is 22,3 million dals.

Besides, volumes of producing vodka have also reduced as well as beer, for about the same indices in percent.  So, 8,348 million dals of vodka were produced during the first six months of 2015, that is for 25,1% less, than during the same period of 2014. There have produced 1,387 million dals of vodka during June, 2015, that is for 55,3% less, than in June of the previous year.

But there is another situation with the production of cognac and brandy. There have been produced for 15,9% more of cognac during  6 months, than it was in the previous year. This index means 1,3 million dals. The index of producing cognac has increased not much – for 3,8% during June of 2015 as compared with June of 2014. Generally, volume of production is 0,208 million dals.